Developing a fermentation process for biologics can be daunting – and rewarding.

Biologic pharmaceuticals offer vast new avenues for treating an extensive array of diseases and chronic conditions. As the field has advanced, microbial fermentation has grown in prominence as a biologic production method due to its distinct advantages. This technique has even become preferred over cell culture for producing certain classes of biologics.

However, compared to making traditional chemical drugs, biologic fermentation is decidedly more complicated — instead of synthesizing inert substances, fermentation entails many sub-processes to coax living organisms into creating the active pharmaceutical ingredient (API). Though all biologic fermentation cycles are unique, tailored according to the manufacturer’s desired product, many common concerns underpin them.

Biologic fermentation development starts with decisions about the fundamentals.

At the outset of the fermentation development cycle, the most important matters to decide are which DNA segment needs to be used, how it will be modified for insertion, and which organism will be used as the host for production. The choice of expression vector to insert the segment into the protein-producing host depends on the size of the gene, the host to be used, and how the DNA will be expressed.

The main types of microbes used in modern fermentation development of biologicals are bacteria and fungi. Bacteria can offer rapid fermentation, but it may also create unwanted protein byproducts in the form of insoluble aggregates, adding time and cost to the process by necessitating additional filtration steps. This can be avoided by building a bacterial system that uses techniques to encourage soluble protein expression.

Fungi can produce a wide range of substances of interest to the biopharmaceutical industry, such as asparaginase and paclitaxel. Yeast is the fungus most commonly used in biologic development, having excellent versatility; it can even be modified to co-produce two different proteins in the same strain. A drawback of microbes is that they are more suited for small protein synthesis, as they are inadequate at making large proteins compared to mammalian cells like Chinese hamster ovary cells. However, recent work has broken ground in surmounting this problem with yeasts specially engineered for making larger proteins.

Scaling up for fermentation production takes care and precision. 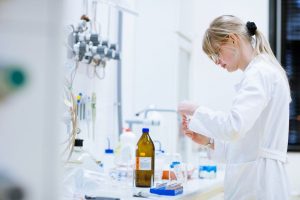 Increasing the quantity of microbes from the small amounts used in the initial pilot testing stage to the larger number needed for the scale of mass output is a slow and delicate process. The cell line to be used should be optimized for fermentation. Out of the pilot group of microbes, the ones that will found the expression strain should be selected for their stability, productivity and accuracy of molecular production.

New efforts are being made to optimize microbes for productivity through means of cell engineering, including improving the secretory pathway and glycoengineering. Cloning can be used to create a sufficient stock of cells that display the requisite traits.

When the right members for the working strain have been identified, they are grown in quantity using enzymes and frozen to compose the master cell bank. This helps establish uniformity and standardization of results for any work performed with the strain. For each production run, a group of cells is taken from the master bank and carefully thawed to form the working cell bank. 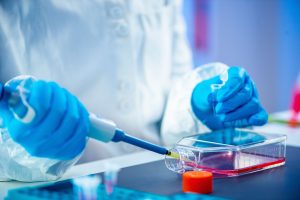 The media that forms the microbes’ environment has a profound impact on the final result. Temperature must be kept steadily controlled, nutrients need to be provided in the ideal ratio for support and sustenance, and the broth has to be aerated, pH-balanced, and gently agitated. Bioassays and constant monitoring to ensure conditions stay within the optimal ranges is important. More manufacturers are opting for disposable, single-use bioreactors, given the flexibility that these offer.

Once fermentation is finished, the last hurdle before formulation and distribution is isolating the desired biological product from the microbe-media broth through several rounds of refinement, usually in three phases: initial extraction, purification, and polishing. This can be achieved through a wide variety of chemical and physical methods. These include chromatography, filtration, and lysis. The shape of this stage also depends on whether the substance to be isolated was created intra-microbe or excreted into the media.

Biologic fermentation development encompasses many disciplines, from biochemistry to microbiology, coming together to build something new. Given the recent growth of biologic pharmaceuticals, and the further still that this field is projected to expand, with the next generation of “biobetters” now arriving and novel semi-synthetic approaches being derived, there are ample opportunities for developers to distinguish themselves in this market.