Improvements throughout the pipeline bring greater biologic yields, as well as higher quality.

Improvements throughout the pipeline bring greater biologic yields, as well as lower costs.

Bioprocessing is the production of natural or genetically manipulated cells (or other organic parts). In the field of biologic pharmaceuticals, bioprocessing is used to generate proteins like monoclonal antibodies (mAbs), as well as viral vectors for the transmission of targeted gene therapies, and many other cutting-edge therapies.

However, bioprocesses have long been known to tend toward inefficiency and high costs. In large part, this is due to the nature of the processes themselves: generating, harvesting and storing sizable quantities of proteins or cells will inevitably result in some lost product. Even so, bioprocesses can be analyzed and re-engineered to increase their efficiency, helping contain those costs.

As a growing number of pharmaceutical developers compete to bring new biologic therapies to the clinical trial stage, and eventually to market, optimization of both upstream and downstream bioprocessing is essential for cost-effectiveness and effective competition in the marketplace. The following analysis breaks down some of today’s key concerns in the optimization of upstream and downstream bioprocesses, with a focus on cost containment. 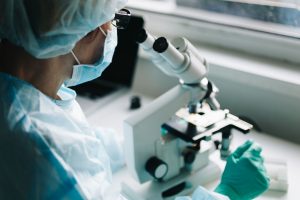 The creation of a viral or bacterial vector, or a protein such as an mAb, involves a number of upstream steps, including the selection of host cells and expression vectors, as well as transfection and selection processes. In any of these steps (and often in several of them), product may be lost before it has even reached a stage where it can be harvested. Thus, upstream optimization is needed to avert common dangers such as accumulation of ammonium or lactate, as well as various biostability problems that can inhibit cell and protein growth.

One area of focus is the optimization of the media in which the cells and proteins are grown. While the 1970s and 1980s saw a proliferation of serum-free media that enabled tighter control over growth environments, more recent years have seen a surge in the development of media without any animal-derived ingredients, which offer much stronger protection from contamination. Today, the optimization of a media blend for a given cell line may take weeks or even months of careful experimentation, including screening, identification of necessary and beneficial components, testing, and verification of the desired growth results.

A growing number of biologic developers and contract manufacturing organizations (CMOs) are also working to streamline their bioreactor production lines. Single-use disposable bioreactors have lately come into more widespread use, due to the smaller capital investment they require, as well as the increased operational flexibility they provide. For a wide range of biologic products requiring similar growth environments, on the other hand, a generic harvest system may better serve a production line’s needs. Such a system will likely include processes such as centrifugation and depth filtration to remove impurities and achieve higher concentration of the end product.

In addition to optimization of growth media and bioreactors, upstream optimization also focuses on the development of more efficient, productive process strategies throughout the production line. Many CMOs design individualized processes, tailored around the specific needs of a given bioprocess, to remove byproducts and add nutrients to the growth media at certain stages. A growing number of CMOs also seek out filtration- and acceleration-based cell retention devices, such as cell settlers and vortex-flow filters, that will scale smoothly as the output of a given production process increases. New advancements in flow filtration can offer significant increases in cost efficiency and product quality, for developers and CMOs that proactively investigate and implement these devices in their facilities.

In contrast to upstream optimization, which focuses mainly on preservation of cells and proteins as they grow, downstream optimization focuses primarily on achieving maximum yield from each lot, and ensuring that the resulting product remains as concentrated and high-quality as possible. These improvements may be achieved by implementing additional filtration and purification steps, introducing new high-throughput methods, and/or re-engineering existing processes to streamline the pipeline from cell harvest to final product.

Chromatographic separation methods are often used to isolate mAbs (or other desired proteins) from the fermentation broth after harvesting. Chromatographic separation is highly selective, resulting in a significantly higher flow and purity rates than conventional filtration techniques. In fact, recent advances have helped further integrate chromatographic separation into the production process, allowing for fine-tuned adjustment of elution conditions, thus effectively eliminating the need for buffer exchanges between the separation step and the preceding and succeeding ones. In addition, some CMOs perform their own optimizations on ligands and matrices in the chromatography step, reducing cell residence times and increasing flow rates even further.

Beyond chromatographic methods for separation, downstream optimization increasingly utilizes non-chromatographic operations to filtrate media. One area of particularly significant development is that of membranes, which can be used to remove undesirable biomass and other particles based on molecular weight, prior to the chromatographic separation step. Newer membranes can even adsorb specific molecules selectively according to their chemical properties, enabling more precise microfiltration. Crystallization has also proven to be an efficient method for rapidly purifying proteins and other small molecules, though it remains largely untested. Coming breakthroughs in the next several years will likely improve the stability of final products of crystallization, enabling this method to be integrated into downstream bioprocesses.

However, the greatest challenge in downstream optimization is not simply to adopt cutting-edge methods, but to integrate these methods seamlessly into a single high-throughput screening sequence. The need for steps such as buffer exchanges, as well as the practical limitations of physically transferring harvests from one piece of machinery to the next, continue to demand specialized solutions for individual facilities and product pipelines. As a growing number of CMOs work to standardize downstream unit operations, successful techniques can be applied to other pipelines, reducing the development time and capital investment required for future products.

While the past few decades have witnessed significant progress in the fields of upstream and downstream bioprocess optimization, the proliferation of new media and filtration methods demands ongoing attention from developers and CMOs alike. Meanwhile, as a growing number of biosimilars and newly patented vectors enter the clinical trial phase, process experts must work continually to develop and implement new operations, in order to ensure maximum yield and quality in their final products. By partnering with CMOs experienced in optimizing upstream and downstream bioprocesses, biologic developers can meet their manufacturing goals while staying ahead of ever-evolving trends and technologies in this highly competitive space.